No down payment for crypto-based home loans; The role of digital coins in US real estate deepens

Crypto mortgages allow buyers to keep bitcoins, without depositing anything

It took Vincent Burniske months to secure a seven-figure loan to buy two small apartment buildings in a coveted Miami neighborhood. The sports media consultant had money – but much of it was crypto-related.

Digital wealth meant little to banks when it came to a mortgage. And Burniske, 63, wanted to keep his coins rather than exchange them for dollars.

“If you cash in, you have to pay huge taxes and you leave a lot of benefits on the table because you get out early,” he said.

Then came an option that wasn’t available when Burniske found the properties late last year: a 30-year fixed-rate mortgage secured by a portion of his Bitcoin and Ethereum holdings.

He secured the loan from Milo Credit, a Miami-based startup looking to tap into the burgeoning pool of crypto-loyals who want to diversify their wealth while retaining their tokens.

Crypto mortgages are the latest example of the growing role of digital coins in the U.S. real estate market as home buyers and lenders embrace volatile currencies to underpin trades in hard assets.

Last year, Fannie Mae began allowing borrowers to use crypto for their down payments. New buildings being built in tech hotspots like Miami are accepting digital tokens for deposits on condos. A house in Tampa, Florida was even sold as an NFT earlier this year.

The home loans offered by Milo represent a new twist. Instead of simply paying for a property with tokens, borrowers pledge their digital assets as collateral, with no down payment required.

It also increases risk by using a volatile asset to fund purchases at a time when the booming U.S. housing market faces a downturn following the fastest rise in borrowing costs in decades.

Milo wants to make these loans big business by bundling them up and selling them to banks, asset managers and insurance companies, perhaps even offering them as bonds in a securitization, according to the founder Josip Rupena.

“We have advised on several matters involving the origination of crypto and NFT-backed loans for potential securitization and similar concepts,” said Steve Blevit, partner at asset finance law firm Sidley Austin. “We see a lot of interest in this area and expect it to develop into a new asset class.”

Until now, those with large crypto holdings who didn’t want to sell turned to companies like BlockFi, which offers secured loans that can be used to purchase property. There’s also Unchained Capital, based in Austin, Texas, which offers three-year loans with interest rates of up to 14%.

Milo, which started taking out home loans in 2019 for non-US citizens, offers a product that looks more like a traditional mortgage. If its waiting list of more than 8,000 people ready to buy property in states including Texas, California and New York is any indication, the company’s crypto offering could eclipse its $100 million worth of loans to foreign nationals.

The company has issued pre-approval letters for $340 million in mortgages over the past 30 days. Milo recently received $17 million in Series A funding led by venture capital firm M13 to help fuel growth.

“We’re going to refine that and expand it,” said Rupena, 38. “Milo will seek to provide other long-term solutions for those with crypto wealth – not just mortgages.”

It’s the kind of lofty ambition that carries over to the crypto economy and Milo’s hometown of Miami, where the culture of decentralized finance is rapidly taking hold.

In the city’s Wynwood neighborhood, the Bored Ape NFTs, which gained popularity with the help of Snoop Dogg and Justin Bieber, hang out on building facades and telephone poles.

Cranes dot the skyline between old warehouses about to be flooded by Blockchain.com and MoonPay employees. 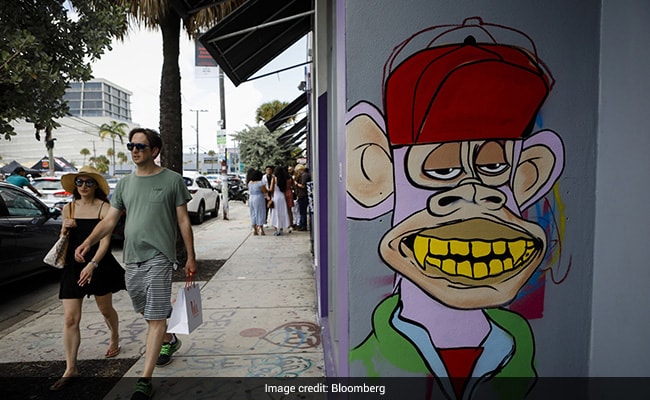 Learn more about Miami’s ambitions to be a crypto hub

Even though the value of digital assets has exploded over the past decade, currently standing at around $2 trillion, it is a big challenge to break into the highly regulated, decades-old mortgage industry.

Skeptics point to the volatility of cryptocurrencies: bitcoin infamously soared 305% in 2020, but is down more than 40% from an all-time high. Ether and other altcoins also suffered steep declines.

The crypto has also caught the eye of government officials who have expressed concern over the lack of regulatory oversight and oversight that can lead to fraud and other issues.

Proponents remain steadfast, saying the tokens will prove their worth over time. Bitcoin has still gained almost 500% since the end of 2019.

Milo lends up to $10 million on homes and digitizes the process so closing takes two to three weeks. Borrowers must pledge at least the amount of the property and coins are transferred to a custodian for safekeeping.

The seller of the property is paid in dollars funded by Milo. Borrowers can then make their monthly payments in crypto or traditional cash. Rates are generally between 3.95% and 5.95%, which is the average borrowing costs for a traditional 30-year mortgage.

To account for volatility, Milo will ask the borrower to provide more crypto or cash if the crypto loan amount drops below 65%. If this figure falls below 30%, the company liquidates the assets and stores them in US dollars.

It’s a particularly big risk to take on an asset as personal as a house, said John Kerschner, head of US securitized products for Janus Henderson Investors.

“A crypto mortgage seems inefficient given the volatility,” he said. “People think Bitcoin will go to the moon but nobody thought the big financial crisis or Covid was coming. These things happen.

Burniske, who used his mortgage to buy investment properties, already has tenants in his four units, nestled between a 1920s Venetian swimming pool and the Biltmore Hotel in what is known as the Golden Triangle of Coral Gables. For him, the crypto mortgage is just another example of a concept that is quickly becoming a reality.

“I was convinced I was going the conventional loan route,” he said. “It’s comfortable. That’s what we know. But all the time there are better financing options and you really have to be careful.

To contact the author of this story: Heather Perlberg in Washington at [email protected]

Bank of Industry increases profits by 75%; Declares payment of dividends to Ministry of Finance and CBN

Conclusion: the war against digital payment does not reach its target